Thousands of people are worrying about their homes as the Pipeline Fire burns out of control near Flagstaff.
By Peter Valencia and AZFamily Digital News Staff

PHOENIX (3TV/CBS 5/AP) -- A state of emergency was declared in Flagstaff on Monday as an out-of-control wildfire rages near the city, sparking the evacuation of hundreds of homes. Flagstaff Mayor Paul Deasy made the emergency proclamation on Monday afternoon, freeing up more resources for those impacted by the Pipeline Fire. The Pipeline Fire has been fueled by high winds that have grounded aircraft as an option for firefighting. Crews are planning to fight the fire from the air on Tuesday as winds moderate, authorities said.

According to Coconino County Sheriff’s Office Chief Deputy Bret Axlund, one home and one “secondary structure” have been destroyed in the fire. Arizona Snowbowl ski resort said it’s closed until further notice.

Incident Cmdr. Aaron Graeser said the Flagstaff-area fire is one of the country’s top priorities for firefighting resources. “Every potential fire source was a problem today, and every potential unburned area was receptive to fire today,” Graeser said. “That puts us in an interesting situation of trying to, again, assign resources the best we can based on that.”

The Pipeline Fire was at 5,000 acres on Monday morning and officials said it has grown since then but wouldn’t give an updated acreage amount since it can’t be mapped from the air. About 600 firefighters are on the firelines working to protect homes in the area as strong winds have made the firefight more difficult throughout the day. Windy weather is expected to continue through Tuesday. Crews from California have been brought in to help stop the fire. Coconino County Sheriff’s officials have issued six evacuation notices, including Timberline, McCann Estates, and Doney Park North.

The Flagstaff Fire Department and the National Forest Service say the fire was reported around 10:15 a.m. by a fire lookout on Sunday. It started about 6 miles north of Flagstaff. Several areas are under “Set” or should get ready to evacuate. They include Mt. Elden Lookout Road/Mt. Elden Estates, Doney Park South and Antelope Hills. The American Red Cross Arizona opened a shelter at Sinagua Middle School for residents who evacuated.

Arizona's Family news helicopter got a birds-eye view of how massive the Pipeline Fire is while flying over Flagstaff on Monday.

On Monday, the Federal Emergency Management Agency (FEMA) announced that it had authorized the state’s request to use federal funds to help fund the firefight. ADOT has closed U.S. 89 north of Flagstaff near Doney Park. There is no estimated time to reopen the road.

ORIGINAL STORY: Suspect arrested as Pipeline Fire burns out of control near Flagstaff

The following areas are listed under a “GO” status:

The following areas are listed as “SET” status (pre-evacuation):

There are currently three areas on 🟡 SET 🟡 status and six areas on 🟢 GO 🟢 status.

What sparked the Pipeline Fire?

On Sunday, authorities arrested 57-year-old Matthew Riser after a forest official said he started the fire and tried to drive off in a white pickup truck along Snowbowl Road. Riser reportedly admitted to lighting toilet paper, which he called “sh**” paper, and had tried to put it out with his sleeping bag, which was 80 yards from where the fire started. Riser later said he was homeless and had been camping in the forest for two days. According to court paperwork, he also admitted to seeing the “no campfire” signs when he drove out.

The area has seen huge wildfires before. About two months ago, the Tunnel Fire burned about 14 miles northeast of Flagstaff which forced hundreds of people to flee from their homes, and at least two dozen buildings were destroyed. The Tunnel Fire burned just over 19,000 acres and took from mid-April to early June to become fully contained.

What weather conditions are crews working with?

As firefighters work with dangerously strong winds, a red flag warning is in effect for all of northern Arizona. Arizona’s Family First Alert weather team has since issued a First Alert weather day. Early Monday morning, Meteorologist April Warnecke forecasted southwesterly winds that could gust up to 55 miles per hour. Relative humidity below 10% is also expected to also impact fire operations. 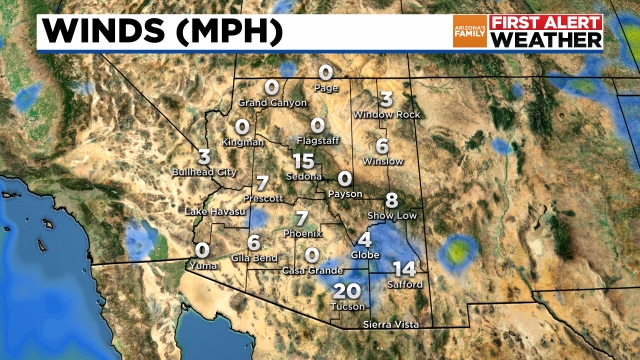 Stay with Arizona’s Family for more updates. The Associated Press contributed to this report.