FLAGSTAFF, AZ (3TV/CBS 5) -- A major firefight entered its fourth day on Thursday as the Tunnel Fire rages near Flagstaff and damages homes. In an update around 7:30 p.m., the Coconino County Sheriff’s Office says 109 properties in the Timberline and Fernwood area have been impacted by the fire. Thirty homes were burned, and 24 properties with sheds and barns were destroyed. Officials say the fire moved fast due to extreme weather and strong winds. Officials say it is still unsafe for residents to go back to the area due to ongoing fire, and firefighters continue to battle the flames in the Timberline neighborhood. The Tunnel Fire Incident Management Team is keeping all evacuations in place until Sunday morning.

Officials say the wildfire, burning about 14 miles northeast of Flagstaff, has grown to 20,198 acres; containment is still zero. About 750 homes and businesses are evacuated. There is concern the fire could head south and west, with several subdivisions in that area. With all the wind, firefighters don’t expect to make any real progress here until Sunday.

Gov. Doug Ducey declared a state of emergency that afternoon as the Tunnel Fire leaves more than 750 families out of their homes. A state of emergency allows state officials to allocate more resources and request federal assistance.

“Our team is on the ground working with first responders to monitor the Tunnel Fire in Coconino County,” said Ducey. “As strong winds fuel fires across Arizona, we are doing everything we can to keep Arizonans safe. We pray for the safety of the responders and firefighters in Northern Arizona and are thankful for their dedication to protecting the lives, pets, and property of Arizonans. Our prayers are with the residents affected by the fire and we encourage everyone in the area to follow the guidance of fire officials, stay safe and respond to any evacuation notices. We will continue to monitor the situation and deploy additional resources as necessary.” 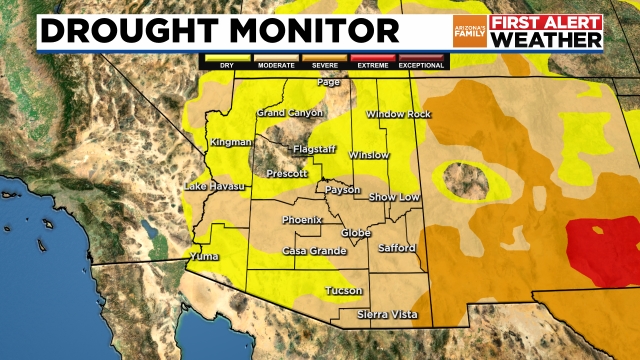 Arizona’s Family is forecasting winds that are expected to ramp up significantly throughout Thursday and into Friday. Wind gusts of 50mph are expected during both days. Those strong winds mixed with dry air spell potential trouble for those on the fireline. On Saturday and Sunday, winds are forecasted to be up to 20 miles per hour coming out of the northwest and northeast.

“Folks, we have entered our fire season,” Brian Klimowski of the National Weather Service told the Associated Press. “It’s going to be a long one this year.” Experts say fires like these are turning into more of a year-round event as recent dry and windy weather continues to spark flames throughout the southwest.

Areas that are preparing to evacuate include:

With no signs of getting the wildfire under control, those in the fire’s path are still under mandatory evacuation orders. Those forced out of their homes can stay at Sinagua Middle School. Animals are still being taken in at a pop-up shelter for animals that High Country Humane had set up at Fort Tuthill County Fairground And Park. Residents who need additional assistance or have questions should call the county at 928-679-8525.

More than 100 people showed up to Wednesday’s night community meeting. While fire crews provided little new information, it showed that residents in Coconino County were grateful for the first responders and the volunteers who are working to keep everyone safe. Utility providers like Arizona Public Service (APS) are working to assess the damage, and they’ve already started restoring power in some areas.

County officials expect a Pacific Northwest Type 1 management team to arrive later in the day and begin managing operations on Friday as dozens of firefighters continue working to put the flames out. At last check, about 260 firefighters were assigned to the Tunnel Fire. There are 24 engines, an airplane, a helicopter, and other resources. U.S. Highway 89 remains closed north of Flagstaff.